This Specification is free software; you can redistribute it and/or modify it under the terms of the GNU General Public License as published by the Free Software Foundation; either version 3 of the License, or (at your option) any later version.

This Specification is distributed in the hope that it will be useful, but WITHOUT ANY WARRANTY; without even the implied warranty of MERCHANTABILITY or FITNESS FOR A PARTICULAR PURPOSE. See the GNU General Public License for more details.

You should have received a copy of the GNU General Public License along with this program; if not, see http://www.gnu.org/licenses.

The key words “MUST”, “MUST NOT”, “REQUIRED”, “SHALL”, “SHALL NOT”, “SHOULD”, “SHOULD NOT”, “RECOMMENDED”, “MAY”, and “OPTIONAL” in this document are to be interpreted as described in RFC 2119 (see “Key words for use in RFCs to Indicate Requirement Levels").

The Majordomo Protocol (MDP) defines a reliable service-oriented request-reply dialog between a set of client applications, a broker and a set of worker applications. MDP covers presence, heartbeating, and service-oriented request-reply processing. It originated from the Majordomo pattern defined in Chapter 4 of the Guide (see “ØMQ - The Guide"). The Majordomo pattern has no relation to the open source mailing list software with the same name.

The goals of MDP are to: 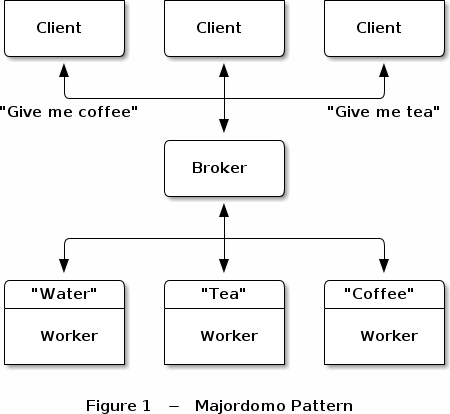 MDP connects a set of client applications, a single broker device and a pool of workers applications. Clients connect to the broker, as do workers. Clients and workers do not see each other, and both can come and go arbitrarily. The broker MAY open two sockets (ports), one front-end for clients, and one back-end for workers. However MDP is also designed to work over a single broker socket.

The Majordomo broker handles a set of shared request queues, one per service. Each queue has multiple writers (clients) and multiple readers (workers). The broker SHOULD serve clients on a fair basis and MAY deliver requests to workers on any basis, including round robin and least-recently used.

The broker may be an intermediary (a device) or it may be a client application that implements MDP/Worker directly. Similarly, the broker may integrate services directly rather than using MDP/Worker.

This extra frame is not shown in the sub-protocol commands explained below.

A REQUEST command consists of a multipart message of 4 or more frames, formatted on the wire as follows:

A REPLY command consists of a multipart message of 4 or more frames, formatted on the wire as follows:

Clients SHOULD use a REQ socket when implementing a synchronous request-reply pattern. The REQ socket will silently create frame 0 for outgoing requests, and remove it for replies before passing them to the calling application. Clients MAY use a DEALER (XREQ) socket when implementing an asynchronous pattern. In that case the clients MUST create the empty frame 0 explicitly.

Clients MAY use any suitable strategy for recovering from a non-responsive broker. One recommended strategy is:

The asynchronous heartbeat dialog operates on the same sockets and works thus:

A READY command consists of a multipart message of 4 frames, formatted on the wire as follows:

A REQUEST command consists of a multipart message of 6 or more frames, formatted on the wire as follows:

A REPLY command consists of a multipart message of 6 or more frames, formatted on the wire as follows:

A HEARTBEAT command consists of a multipart message of 3 frames, formatted on the wire as follows:

A DISCONNECT command consists of a multipart message of 3 frames, formatted on the wire as follows:

MD/Worker commands all start with an empty frame to allow consistent processing of client and worker frames in a broker, over a single socket. The empty frame has no other significance.

Opening and Closing a Connection

The Majordomo pattern is designed to extend the basic ØMQ request-reply pattern with the ability to detect and recover from a specific set of failures:

The general approach is to retry and reconnect, using heartbeating when needed. Majordomo supports live-live broker failover indirectly, by keeping no significant state in a broker. Actual failover to alternate brokers is handled by the clients and workers, not the protocol. For a fuller discussion of these failures and the strategies that Majordomo uses to detect and recover, see Chapter 4 of the Guide (see “ØMQ - The Guide").

Majordomo is designed to be scalable to large numbers (thousands) of workers and clients, limited only by system resources on the broker. Partitioning of workers by service allows for multiple applications to share the same broker infrastructure.

Throughput performance for a single client application will be limited to tens of thousands, not millions, of request-reply transactions per second due to round-trip costs and the extra latency of a broker-based approach. The larger the request and reply messages, the more efficient Majordomo will become. Majordomo may be complemented by high-speed data delivery architectures.

System requirements for the broker are moderate: no more than one outstanding request per client will be queued, and message contents can be switched between clients and workers without copying or processing. A single broker thread can therefore switch several million messages per second, and multithreaded implementations (offering multiple virtual brokers, each on its own port) can scale to as many cores as required.

MDP does not implement any authentication, access control, or encryption mechanisms and should not be used in any deployment where these are required. However, all these can be layered on top of MDP, and may be the subject of future RFCs.

The C99 Majordomo examples from Chapter 4 of the Guide (see “ØMQ - The Guide") act as the prime reference implementation for MDP. There is a Python implementation of MDP by Guido Goldstein.